Broadway World's Performer of the Week!

Exciting news!! I have been selected as Broadwayworld.com's Performer of the week. This is a great networking opportunity, please read below to see the article....


BroadwayWorld is thrilled to present its latest feature series: The Performer of the Week!

Get to know these amazing talents as they share a bit about themselves, their work and life!

Originally from Cincinnati, Miriam currently lives in New York City and has been working in the acting industry for over 10 years. She was recently featured in a short-filmed with director/writer/producer Keith Powell from 30 Rock.

Miriam received her BFA in Musical Theatre from Kent State University and just spent her holiday season working at Busch Gardens in Virginia.

1) What are you working on right now? I am currently the lead singer of the Killarney Band at Busch Gardens in Williamsburg, VA. But I plan on moving back to NYC after that. New York is the best city because all of the auditions are right down the street!
2) What has been your professional biggest accomplishment so far?
My biggest accomplishment so far has been taking the leap into film. I have worked on a few films/commercials and so far I love it. I look forward to learning more about it as it was not my main focus in school.
3) Share your funniest or worst audition moment

The funniest audition moment had to have been when the auditioners started singing my song as I was walking out of the room. I guess my piece was memorable!
4) What's your dream role?
Right now my dream role would have to be Fiona in Brigadoon. I have already played this role but never in the professional arena.

5) If you weren't a performer, what would you be?
A vet. I love fostering animals and giving them a second chance at life. Pets are always happy to see you and give you so much love!

6) Where do you see yourself in 5, 10 years?
Hopefully being an established equity actor in New York City.
7) Where can people find you online?
On Twitter @Miriamsbored and on miriamh-m.blogspot.com

BWW wants to feature YOU! Interested? Contact romi@broadwayworld.com and we'll get you set up!"
Check out the original article


Posted by Miriam Henkel-Moellmann at 9:55 AM No comments:

Back at Busch Gardens!

This Spring I find myself once again at Busch Gardens, VA and I am lucky to be the lead singer for the Killarney Village Band. We perform classic Irish Jigs and Reels while interacting with guest in the park. 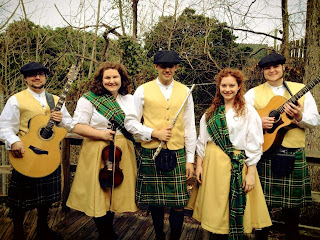 It has been such a great opportunity for me to learn another style of music. The rehearsal process was like none other I have been apart of, as the only singer, we all sat in a large circle and learned it as a large ensemble. The band is comprised of two guitar players, one floutest, and a fiddle player. We were all new to this style of music so it was a learning process for all. When we are performing for guest we interact with Irish accents, needless to say it has certainly slipped into our regular conversations by accident.

I am hoping to add more videos of our band on youtube but luckily someone posted "we're on the one road", check it out! 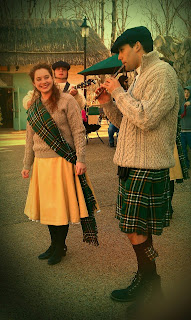 Posted by Miriam Henkel-Moellmann at 9:41 AM No comments:

My Christmas at Busch Gardens 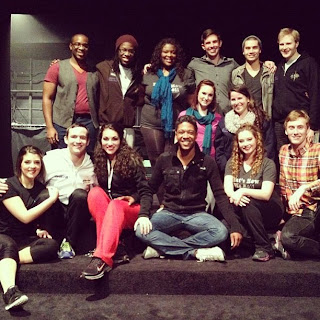 I celebrated my second Christmas away from home but this time I was working at in . The show was called Gloria!, it was the gospel musical retelling of the nativity. It featured arrangements from holiday favorites such as, "The first Noel", "Away in a Manger", "We Three Kings" and "Do You Hear What I Hear". This was my first experience working in an amusement park and I LOVED it. We all had such a good time this winter season it did not bother us we were away for the holidays. I played a shepherdess named Lyzia and was featured in the ensemble aspects of the show. The interesting part about this show was that it was all done on moving platforms, my only fear was that I was going to get vertigo from the motion of things moving under my feet. 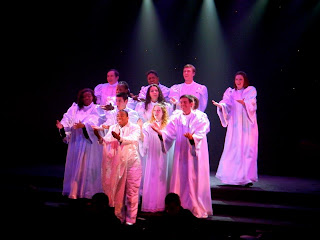 Much of the company were returning from last year and they quickly welcomed me into their family. This production was much different from last year in that they brought in Ken Billington , famous for his Broadway lighting designs in Sweeney Todd (1980), Hello Dolly! (1996), Chicago (Present), and most recently Chaplin. His designs made our scenes look so ethereal that it could be mistaken for a movie. Not only did we have Ken come in to help but also Lisa Shiver (B'Way Jesus Christ Superstar and The Story of my Life to mention a couple) returned to stage the show. With such a talent team we put on a spectacular show, many of our performances had waiting lines that wrapped around the park! I look forward to auditioning for Busch Gardens in the future and perhaps returning again during the Christmas season. As I head back to NYC I will certainly miss all of my friends down in Virginia but I have no doubt our paths will cross again.

"Saw this last night for the first time this year. I thought it was infinitely better than last year. Like, not even close. I actually legitimately enjoyed it. They pretty much resolved every major complaint I had about the show last year"

"Their version of "Do You Hear What I Hear" is one of the best I've every heard. The audience at yesterday's 3:30 performance gave the cast a standing ovation"


﻿
Posted by Miriam Henkel-Moellmann at 5:55 PM No comments:

Look what I found!

Just happend to be browsing the internet and came across this article from the Richland Area Business Association written by Paul Gobble,


The Barnies are Back!

"For the second year in a row, The Barn Theatre will be joining The Richland Independence Day Parade by having one of their gifted vocal talents perform The National Anthem. Last year the Barn Theatre came through after a last minute cancelation to save the parade by sending Miriam Henkel-Moellmann, a recent graduate of Kent State's BFA in Musical Theatre program, to grace the crowds with the National Anthem. Her performance was so popular that we just had to ask the Barn Theatre come back... " 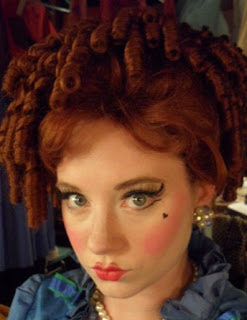 Posted by Miriam Henkel-Moellmann at 5:13 PM No comments:

Won the 2012 WILDE award for my Category along with Natalie Sparbeck.

As the evil stepsisters we won a Wilde Award for

The Wilde Awards is a celebration of the best of Michigan professional theater that occurs every Summer. They are produced and presented by Encoremichigan.com and the Michigan Equity Theatre Alliance. It was such an excitement even to be nominated and even more a pleasure to win the award.

Some of the press we received for Cinderella...

"But it's the nasty trio of evil stepmother and two stepsisters who threaten to steal the show from under Cinderella's very capable glass slippers. Penelope Alex is a deliciously vile and vain Stepmother, constantly picking at her ditzy, lazy daughters. Miriam Henkel-Moellmann, as stepsister Joy, and Natalie Sparbeck, as stepsister Grace, are a superb comic duo and they deliver a pitch-perfect rendition of the Stepsisters' Lament, one of the show's best numbers."
-Judith Cookis Rubens (Encore Michigan, 2011)

"Miriam Henkel-Moellmann and Natalie Sparbeck, as the Stepsisters create comic bits that accentuate the "eeewww" factor, particularly when they dance with the Prince at the ball."
-Gordon Bolar (The Kalamazoo Gazette, 2011) 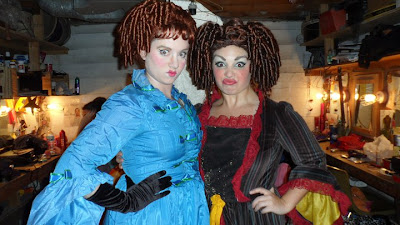 Posted by Miriam Henkel-Moellmann at 12:12 PM No comments:

The Sound of Music at Porthouse

The Hills Are Alive.....Porthouse Summer Stock 2012

Spent another great summer at Porthouse Theatre under the direction of Kent State's Terri Kent. I was fortunate enough to take on multiple roles this summer onstage and off. Kent State has an academy for students who will be incoming Freshmen at Kent State in the School of Theatre and Dance. These student take classes during the day and at night they perform and help out in the last show of the season. The girls were able to all be nuns in The Sound of Music. I was a teaching assistant for Jamie Koeth, a Cleveland area equity actor. In their acting classes they learned basic technique for preparing monologues and looking for actions/qualities. It was so benefiting for me to help out with the class because it made me remember everything I learned in my classes and as a result I want to work harder. This year in the city I want to work harder on learning new material but also adding more layers to the pieces I already have prepared. Proud does not even describe the sense I felt when they did their auditions for placement into the Musical Theatre program. Not only did I meet with some students one on one but I was also able to teach a Basic Modern dance class and I think I'm addicted!!! Something I know I will be interested in pursuing in my future.

Not only did I act as a teaching assistant but I was also in The Sound of Music as a nun and Maria understudy. Any possible chance I get to understudy an equity actor I take it! It gives me experience and I enjoy sitting in rehearsals and watching people at work.  On top of the wonderful nun costumes, I got to be the dance captain for the show with the choreography by Mary Ann Black. I have had dance classes with Mary Ann before and having known her was a big help throughout the process. Seeing the way she interacted with equity actors and the students gave me such an appriciation for her work. 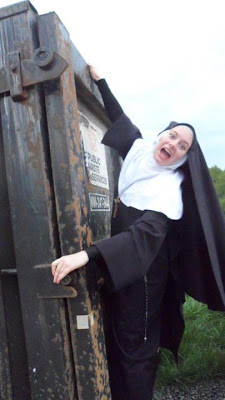 After my brief stay with Porthouse I plan on going to SETC's in Atlanta, GA in September. This is my first SETC conference and I could not be more excited. Following that I will be back in NYC to conquer!
Posted by Miriam Henkel-Moellmann at 11:36 AM No comments: 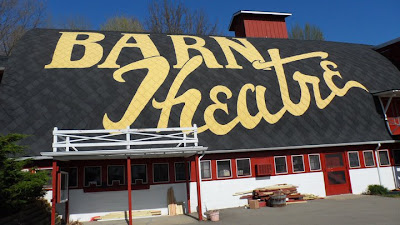 Immediately following school I moved to Augusta Michigan to join the company at The Barn Theater where I have been able to be in the ensemble of both Man of La Mancha and Chicago. It has also been a pleasure to be featured in the late night bar show that occurs right after main stage performances. During the day I work in the costume shop and on top of that work in the bar, at concession stand, usher, dress people, etc... before during and after the shows! See some of my bar show songs on my Youtube.com channel such as...

Eric Tsuchiyama and I singing

and Annie Wessendarp, Elyse Moon and I in

Up Next are auditions for Cinderella.... to be continued....

Cinderella was such a blast! I was cast a Joy one of the EVIL stepsisters with native Michigander Natalie Sparbeck as my sister. We even had a princess day at the Barn where children got to dress up and have tea with Cinderella and her prince (the step sisters were not invited). After the show the princesses and princes got an autograph with the fairy godmother and Cinderella. Bar show for this show was filled with Disney themes. During the bar show I got to sing "true loves kiss" from Enchanted (video to be posted soon).

Posted by Miriam Henkel-Moellmann at 8:14 PM No comments:

Miriam Henkel-Moellmann
Miriam received her BFA in Musical Theatre from Kent State. She recently worked at Busch Gardens in their musical version of the nativity, Gloria! In New York, she was featured in the film "Patterns" starring director/producer Keith Powell (30 Rock) and in a Shazam! phone app. digital commercial. Recent credits include Brigadoon (Fiona MacClaren, Once Upon a Mattress (Winnifred), Jane Eyre (Bertha), Scotland Road (Woman), and A Funny Thing Happened...Forum (Vibrata).